Mentoring in Medicine pays tribute to the following persons, among many others, who have gave so much of their time, talent and love to help our organization improve the lives of so many students and their families

Dr. Primm is internationally recognized as one of the world’s foremost experts on HIV and AIDS. He has served on the Presidential Commission on the Human Immunodeficiency Virus Epidemic, and has represented the U.S. at numerous international conferences, including the World Health Organization’s conference in Geneva and the International Conference for Ministers of Health on AIDS prevention in London. In 1969, he helped to found the Addiction Research Treatment Corporation and has been the executive director ever since. A.R.T.C., located in Brooklyn, New York, is one of the largest minority non-profit community-based substance abuse treatment programs in the country, treating over 2,300 men and women from underserved communities. Since 1983, Dr. Primm has also been President of the Urban Resource Institute, an umbrella organization that supports various community-based initiatives and social service programs for battered women, the developmentally disabled, substance abusers, and those infected with HIV and AIDS. A national authority on drug addiction, Dr. Primm has served as an adviser to the National Drug Abuse Policy Office since the Nixon administration. He has written over thirty articles on addiction and has been a visiting lecturer at Columbia University, Harvard University, New York University and other leading institutions.

From the beginning, Dr. Muriel Petioni was destined to become a doctor. Born on January 1, 1914, into a family with a formidable medical tradition-nine of her family members are doctors-she spent her early childhood years in Trinidad and Tobago before moving with her family to Harlem, New York, where her father set up a private practice. Petioni soon followed in her father’s footsteps, graduating with a B.S. from Howard University in 1934, and graduating from Howard University Medical School three years later.

After a two-year internship at Harlem Hospital Center from 1937 to 1939, Dr. Petioni became a college physician at several universities, and in 1942, she married a Tuskegee Airman named Mal Woolfolk. After having a son, in 1950, she set up a private practice in the very same Harlem office her father had used. For 40 years, she tirelessly served the Harlem community as a doctor, educator and community activist to ensure that underserved communities receive proper medical attention and equitable access to health care. Her achievements include being chair and founder of the Friends of Harlem Hospital Center, founding the Susan Smith McKinney Steward Medical Society for Women, and being an instrumental mentor to Mentoring in Medicine.

Dr. King, Past Chairman and President of the Friends of the National Library of Medicine (FNLM), has been instrumental in the founding and support of MIM. A renowned pathologist and a former Deputy Director of Research and Education of the National Library of Medicine, he has had a distinguished career serving in the Medical Corps of the United States Army and a faculty member at Yale University. He served as the Chairman of the Pathology Department at University of Colorado, Columbia University, and the University of Chicago throughout his illustrious career. He was a member of the Advisory Committees for the NIH, Veterans Administration, various private foundations, and Pathology societies. 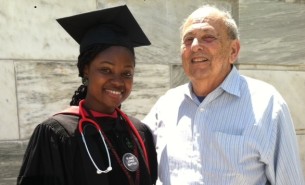 Dr. Dannis is the “hands-on” recruitment dean of Mentoring in Medicine, has been instrumental in its success and has improved the lives of hundreds of students.

Rev. Dr. Alfonso Wyatt is an Elder on the ministerial staff of The Greater Allen Cathedral A.M.E. Cathedral of New York. He provides vital leadership to youth, young adults and professionals in both the sacred and secular communities in New York and around the country. He retired as vice president of The Fund for the City of New York after serving over two decades. Dr. Wyatt is founder of Strategic Destiny: Designing Futures Through Faith and Facts. He has mentored thousands ranging from young people in foster care and juvenile detention facilities as well as adults in prison, or individuals receiving their PhD. He serves as an advisor and consultant to government, colleges, civic groups, community based organizations, public and charter schools, education intermediaries, foundations and the faith community. Dr. Wyatt, married 39 years to Ouida C. Wyatt, co-published their first book, Soul Be Free, Poems Prose Prayers. His second book is titled Mentoring From The Inside Out: Healing Boys, Transforming Men. He is an international speaker in his role as youth development expert and public theologian. He attended Howard University, Columbia Teacher’s College, The Ackerman Institute for Family Therapy, Columbia Institute for Nonprofit Management and New York Theological Seminary where he earned his D.Min. Rev. Dr. Wyatt recently joined the Board of Trustees of New York Theological Seminary; and he is a founding Board member of The Harlem Children’s Zone Promise Academy and served two years as Chairman for The 21st Century Foundation.